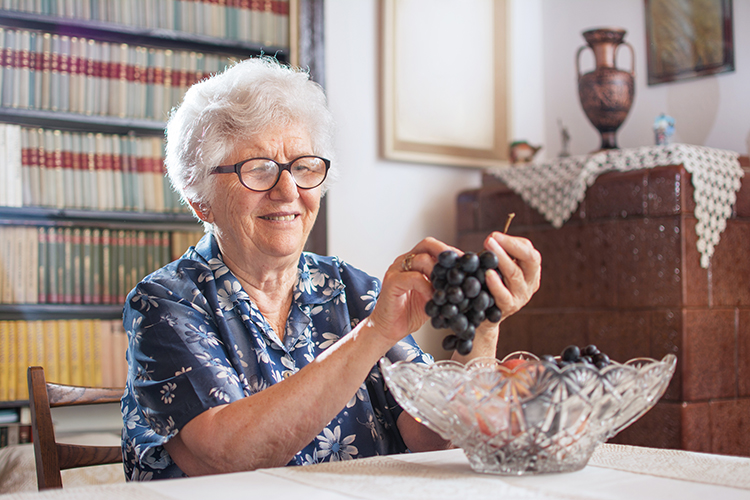 Consuming grapes twice a day for 6 months protected against significant metabolic decline in Alzheimer-related areas of the brain in a study of people with early memory decline. [Bojan89/Getty Images]

Word has spread through the grapevine of a new study by researchers at UCLA who found that consuming grapes twice a day for 6 months protected against a significant metabolic decline in Alzheimer-related areas of the brain in patients with early memory decline. Scientists have known for some time that low metabolic activity in these areas of the brain is a hallmark of early-stage Alzheimer's disease. Results from this randomized, controlled study show that a grape-enriched diet protected against the decline of metabolic activity.

Additionally, those consuming a grape-enriched diet also exhibited increased metabolism in other areas of the brain that correlated with individual improvements in attention and working memory performance, compared to those on the non-grape diet. Findings from the news study were published recently in Experimental Gerontology in an article entitled “Examining the Impact of Grape Consumption on Brain Metabolism and Cognitive Function in Patients with Mild Decline in Cognition: A Double-Blinded Placebo Controlled Pilot Study.”

“The study examines the impact of grapes as a whole fruit versus isolated compounds, and the results suggest that regular intake of grapes may provide a protective effect against early decline associated with Alzheimer's disease,” explained lead study investigator Daniel Silverman, M.D., Ph.D., head of the neuronuclear imaging section of the Ahmanson Translational Imaging Division at UCLA. “This pilot study contributes to the growing evidence that supports a beneficial role for grapes in neurologic and cardiovascular health; however, more clinical studies with larger groups of subjects are needed to confirm the effects observed here.”

The investigators showed that consuming grapes preserved healthy metabolic activity in the regions of the brain that are typically affected by the earliest stages of Alzheimer's disease, where metabolic decline takes hold. Interestingly, the subjects who didn't consume grapes exhibited a significant metabolic decline in these critical regions. Moreover, those consuming the grape-enriched diet showed beneficial changes in regional brain metabolism that correlated to improvements in cognition and working memory performance.

For years scientists have suspected grape polyphenols are part of a healthy diet, as they promote antioxidant and anti-inflammatory activities. Over the years, research has suggested that grapes may help support brain health by working in multiple ways—from reducing oxidative stress in the brain to promoting healthy blood flow in the brain to helping maintain levels of a key brain chemical that promotes memory to exerting anti-inflammatory effects.

As there are currently 5.4 million Americans living with Alzheimer's disease, and the numbers continue to grow, researchers continue to look for new and different ways to prevent and treat the neurodegenerative decline.