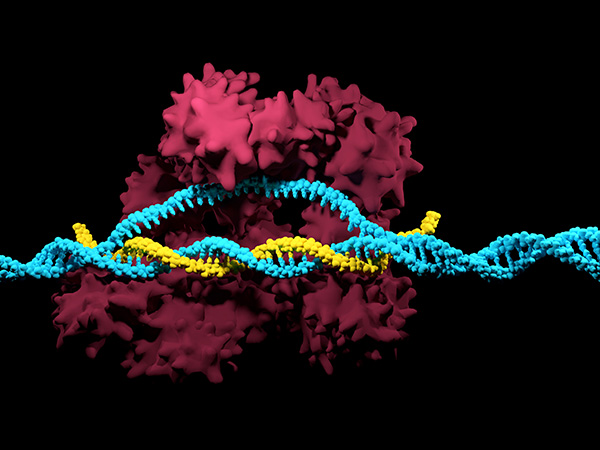 Scientists at the Wyss Institute for Biologically Inspired Engineering have adapted the CRISPR/Cas9 genome-editing system into a genome surveillance tool that acts as a “mutation prevention system” to identify and cut out DNA sequences that carry single point mutations in individual cells. When tested on Escherichia coli strains both in vitro and in the mouse gastrointestinal tract, the system prevented the emergence of antibiotic-resistant bacteria that harbor gain-of-function point mutations.

Reporting on their development in the Proceedings of the National Academy of Sciences (PNAS), Wyss Institute core faculty member George Church, Ph.D., and colleagues claim the new tool will be useful “for the study and control of DNA substitutions, particularly in context where an associated phenotype or evolutionary pathway is undesirable.” Their published paper is entitled “Precise Cas9 Targeting Enables Genomic Mutation Prevention.”

“Our method opens up an entirely new way to think about disease prevention in the future,” states Dr. Church, who is professor of genetics at Harvard Medical School (HMS) and of Health Sciences and Technology at Harvard and the Massachusetts Institute of Technology (MIT).

A single-base substitution in the DNA code can turn a normal cell cancerous, or convert an antibiotic-sensitive bacterium into one that is antibiotic resistant. Scientists have developed methods for classifying these point mutations, but it is much harder to target these cells specifically, the authors explain. To develop a sensitive method that can identify and effectively kill such cells, the authors turned to the CRISPR/Cas9 system. This genome-editing tool, which is derived from a natural bacterial defense mechanism, uses small guide RNAs to lead the DNA-cleaving Cas9 enzyme to a predefined DNA sequence, where the enzyme then cuts the DNA at the required site. Scientists can use the system to remove and replace target sections of DNA in the genome, but if the cut DNA is left unrepaired, the cell dies.

The system isn’t perfect, however. Unspecific activity can allow Cas9 to cut at alternative sites that are not the same as the target sequence. And Cas9 can’t always discriminate the subtle differences between a sequence carrying an undesired point mutation and a normal sequence, so DNA with these single mutations can be missed.

To make the system more precise, the Wyss Institute team developed a method for guide RNA “tuning” that allows Cas9 to discriminate between two target sites that differ by just a single-nucleotide polymorphism. The approach hinges on previous findings that some mismatches between a guide RNA and its target sequence don’t affect the ability of Cas9 to cut the DNA at the specified site.

“We hypothesized that for a given pair of targets that differ by a single point mutation, a set of mismatches could be identified in the guide RNA that would eliminate Cas9's activity on the normal sequence while maintaining robust activity on the one with a deleterious point mutation,” explains Alejandro Chavez, Ph.D., a first and co-corresponding author on the paper. “This would stop a cell with a mutation cold in its tracks right after it is born.” Chavez was a postdoctoral fellow at HMS and is now assistant professor at Columbia University.

The team developed the system to target point mutations in strains of E. coli that render the bacteria resistant to antibiotics. Focusing on a number of these mutations, the researchers screened guide RNA variants with different mismatch combinations to identify specific guide RNAs that would ensure the Cas9 enzyme cut the mutated gene sequence, but not the normal sequence. “… our approach dramatically enhances Cas9's specificity up to a level where single-nucleotide polymorphisms can be clearly distinguished and unwanted genetic variants erased,” states Dr. Church.

Tests on engineered E. coli cells both in culture, and also in the mouse gastrointestinal tract, showed that the new system could prevent the emergence of antibiotic-resistant organisms by cleaving mutated DNA in the bacterial cells. “We employ our methodology to generate an in vivo mutation prevention system in which Cas9 actively restricts the occurrence of undesired gain-of-function mutations within a population of engineered organisms,” the authors write. “ …we show that the mutation prevention system maintains robust activity even when placed within the complex environment of the mouse gastrointestinal tract.”

As well as having  potential use in preventing diseases caused by single point mutations, the new system could in the nearer term also be used in industrial settings to protect large-scale bacterial cultures from developing mutations, and also to study microbial evolution. “This strategy gives us the opportunity to study evolutionary mechanisms in microorganisms,” comments co-lead researcher James Collins, Ph.D., a Wyss Institute core faculty member who is also the Termeer Professor of Medical Engineering & Science at MIT and an MIT professor of biological engineering. “For example, we are now able to prevent often-occurring mutations that confer antibiotic resistance and ask which other genetic changes could lead to the same result. This may improve our understanding of resistance mechanisms and potentially offer new therapeutic entry points.”