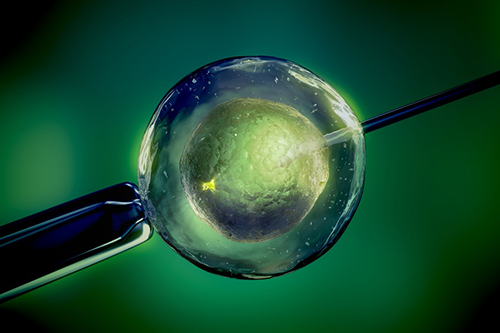 The rigidity of an hour-old fertilized egg can predict its viability. [Source: 3dmentat/Fotolia]

A team at Stanford found that measuring the rigidity of an hour-old fertilized egg can predict its viability more accurately than current methods at this early stage. The technique (“Human oocyte developmental potential is predicted by mechanical properties within hours after fertilization”), described in Nature Communications, could potentially vastly improve the success rate of single-egg IVF, which consequently could improve the prognosis for both mothers and babies.

Current IVF embryo screening is a relatively qualitative procedure. Scientists fertilize an egg with sperm, and five or six days later, once the embryo has reached the 60- to 100-cell blastocyst stage, scientists evaluate the embryo's morphology and the rate at which cells have been dividing. The best-looking embryos that have been dividing at the “best” rate are then selected for transfer.

Plucking a few cells from the blastocyst for genetic testing can increase the odds of choosing a successful embryo, but this invasive procedure can stress the embryo, even though the sample is taken from cells that will eventually form the placenta. In either case, the results are still uncertain, and the roughly 70% failure rate means that doctors typically implant multiple embryos into a mother's womb, in hope that one will take hold. This can often lead to complications.

“A lot of twins are born because we don't know which embryos are viable or not, so we transfer several at one time,” said lead author Livia Yanez, a bioengineering Ph.D. student in David Camarillo's lab at Stanford. “This can increase the risk of neonatal mortality and cause complications for babies and the mothers.

“We wanted to develop a mechanical test that could ascertain embryo viability well enough that doctors could implant just one embryo and have a very good feeling that it would be viable,” she said.

Following an anecdotal tip from Barry Behr, the director of Stanford's IVF laboratory, that some eggs are squishier than others, the researchers began investigating whether this had something to do with the fertilized egg's ultimate development potential.

Using a small pipette, the researchers applied a small amount of pressure to mice eggs an hour after fertilization and recorded how much each egg deformed. They placed the embryos in a standard nurturing liquid and reexamined them at the blastocyst stage. At this point, the eggs that had provided a certain range of “push back” were more likely to produce healthy-looking, symmetrical embryos. The researchers built this data into a predictive computer model that, based only on the egg's squishiness, can now predict with 90% accuracy whether a fertilized egg will grow into a well-formed blastocyst.

“Although cancer and other diseases involve stiff tumors or tissues, our colleagues have been surprised that we can gain so much information from this simple little mechanical test,” said David Camarillo, Ph.D., an assistant professor of bioengineering. “It is still surprising to think that simply squeezing an embryo the day it was fertilized can tell you if it will survive and ultimately become a baby.”

They repeated the experiment with fertilized human eggs and found that the rigidity assessment could foretell whether the embryo would reach a healthy blastocyst stage with 90% accuracy. They are ramping up to test viability in patients.

The researchers are still investigating why squeezing a fertilized egg can provide such powerful information. They have found, however, that the human embryos that were either too firm or too soft under- or misexpressed groups of genes that play key roles in repairing DNA, managing cell division, and aligning chromosomes during replication. In addition, they found a down-regulated gene that is involved with “egg hardening,” which normally occurs after the sperm penetrates the egg to prevent additional sperm from entering. This could hint at why nonviable embryos are unsuccessful, Yanez said.

“From a clinical perspective, once confirmed, the benefit is immense in that it could give us a proxy of viability of the embryo in the blink of an eye, and from that information we can manipulate the patient's cycle in order to improve success,” said Dr. Behr, who is a professor of obstetrics and gynecology at the Stanford University Medical Center and a co-author on the study. “It's very exciting work, and I'm happy to be a part of it.”