Home Virology HBV And Then There Were Four: VBI Scores First FDA Approval with Hepatitis... 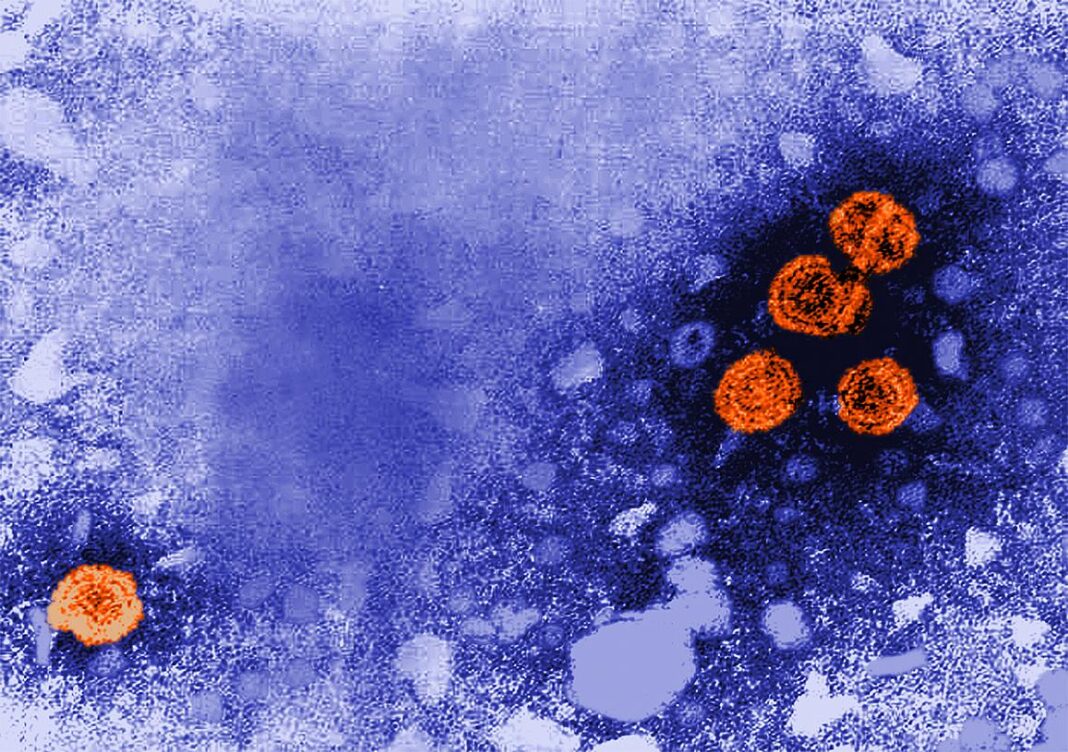 An electron microscopic image reveals the presence of hepatitis B virus (HBV) particles (shown in orange). The FDA has approved VBI Vaccines’ PreHevbrio™ [Hepatitis B Vaccine (Recombinant)] for the prevention of infection caused by all known subtypes of HBV in adults age 18 years and older. [CDC]

In receiving its first-ever FDA approval for a Hepatitis B virus (HBV) vaccine indicated for adults, VBI Vaccines has set its sights on disrupting a market it expects could double—a market currently served by a larger biotech and two pharma giants.

The FDA has approved PreHevbrio™ [Hepatitis B Vaccine (Recombinant)] for the prevention of infection caused by all known subtypes of hepatitis B virus (HBV) in adults who are 18 years and older. The approval came nearly a month after the U.S. Centers for Disease Control (CDC)’s Advisory Committee on Immunization Practices (ACIP) unanimously recommended universal HBV vaccination for all U.S. adults aged 18–59 and for adults age 60+ with risk factors for infection.

According to VBI, ACIP’s vote will nearly double the U.S. HBV adult vaccination market over the next five to eight years, to more than $500 million from about $320 million in 2019. That number could rise even higher, as like the CDC, the World Health Organization (WHO) has committed to eliminating Hepatitis B by 2030.

“It is definitely a call to action and it’s a very important public health initiative that we will support, and we’ll be glad to be bringing another option to the table for clinicians,” Jeff Baxter, VBI’s President and CEO, told GEN Edge.

By the first quarter of 2022, VBI expects the ACIP to decide whether to recommend PreHevbrio—formerly called Sci-B-Vac—for use in the U.S. “Undoubtedly having another option in the toolkit for the prevention of hepatitis B is a big step forward for the ACIP,” Baxter said.

VBI has geared up for commercial launch of PreHevbrio for some 18 months. In December 2020, it hired the contract commercial organization Syneos Health as a commercialization partner offering a broad range of services for PreHevbrio that include public relations, investor relations, medical affairs, sales management, marketing management, brand management, and help with promotional materials.

Q1 2022 is also when VBI expects to make PreHevbrio available in the U.S. VBI isn’t disclosing how much in revenue it expects PreHevbrio to generate. Baxter said the company won’t comment on a Raymond James analyst forecast projecting as much as $250 million in peak-year sales.

Recombivax HB and Engerix-B are indicated for all ages, while Heplisav-B is approved for adults ages 18 and older, as with PreHevbrio.

VBI says it has a competitive advantage over the other jabs because PreHevbrio is the only approved 3-antigen hepatitis B vaccine for adults in the U.S., containing the S, pre-S2, and pre-S1 HBV surface antigens.

“This would be a very robust public health tool to protect against Hepatitis B, especially with the new recommendation of universal vaccination up to age 60,” said Francisco Diaz-Mitoma, MD, PhD, VBI’s Chief Medical Officer. “We’re very happy to contribute to solving this problem of hepatitis B and helping in being a solution for this problem.”

In another Phase III study, the 2,838-participant CONSTANT trial (NCT03408730), PreHevbrio showed strong and consistent immune responses across all three lots of the vaccine after two and three doses, with a higher seroprotection rate—the percent of participants achieving antibody titers above the protective threshold of 10 mIU/mL.

“GSK welcomes new efforts to contribute to the control and elimination of Hepatitis B. GSK has been a leader in helping protect people against Hepatitis B since Engerix B was first approved in the U.S. in 1989,” a GSK spokesperson said.

“Vaccines against hepatitis B have gained an even more important role in public health with the recent CDC Advisory Committee on Immunization Practices vote in favor of recommending that all adults (19–59 years) previously unvaccinated for hepatitis B should receive hepatitis B vaccination. GSK is able to meet the anticipated increased demand for hepatitis B vaccine due to the expanded recommendation,” the GSK spokesperson added.

A Merck spokesperson told GEN: “We cannot speculate on sales at this time, but please note that we price all of our vaccines and medicines to support access for patients today while also promoting the critical investments that will empower our scientists to invent the cures and treatments of tomorrow.”

“We continue to believe has Recombivax has the potential to help address unmet needs in the prevention of Hepatitis B,” the Merck spokesperson added.

Representatives for Dynavax had not responded to GEN Edge questions about the potential impact of PreHevbrio’s impact on their vaccines.

Only Dynavax has disclosed revenues for its all-subtype Hep-B vaccine: Heplisav-B has generated $44.7 million during the first three quarters of 2021, up 82% from $24.5 million in January–September 2020.

GSK does not report individual sales of Engerix, except among “Established Vaccines” within the Hepatitis subcategory which generated £347 million ($460 million) in revenue for GSK in Q1–Q3 2021, down 21% from Q1-Q3 2020.

Merck does not disclose sales for Recombivax; its final set of patents covering methods of manufacture expired in 2020.

The launch of PreHevbrio is among VBI’s priorities for 2022. The company is headquartered in Cambridge, MA, with R&D operations in Ottawa, Canada, and a fully-owned and integrated GMP (Good Manufacturing Practice) manufacturing facility in Rehovot, Israel. The company has also been busy developing three enveloped virus-like particle (eVLP) vaccine candidates designed to protect against COVID-19, each taking a different approach.

In June, VBI said its VBI-2902 showed proof of concept by generating initial positive data in the Phase Ia portion of a Phase I/II trial (NCT04773665). Data showed that a 5-µg dose expressing an optimized form of the SARS-CoV-2 spike antigen and adjuvanted with aluminum phosphate induced neutralization titers in 100% of participants, with 4.3 times the geometric mean titer (GMT) compared to convalescent sera.

Two months later, VBI launched a clinical study of VBI-2905 as a two-dose course and as a single booster dose against variants of concern including Beta and Delta.

“We want clinical data, we really want to assess the potency of these eVLPs in people,” Anderson said. “We’re moving equally fast, we’re pushing hard on everything, at the same time.”