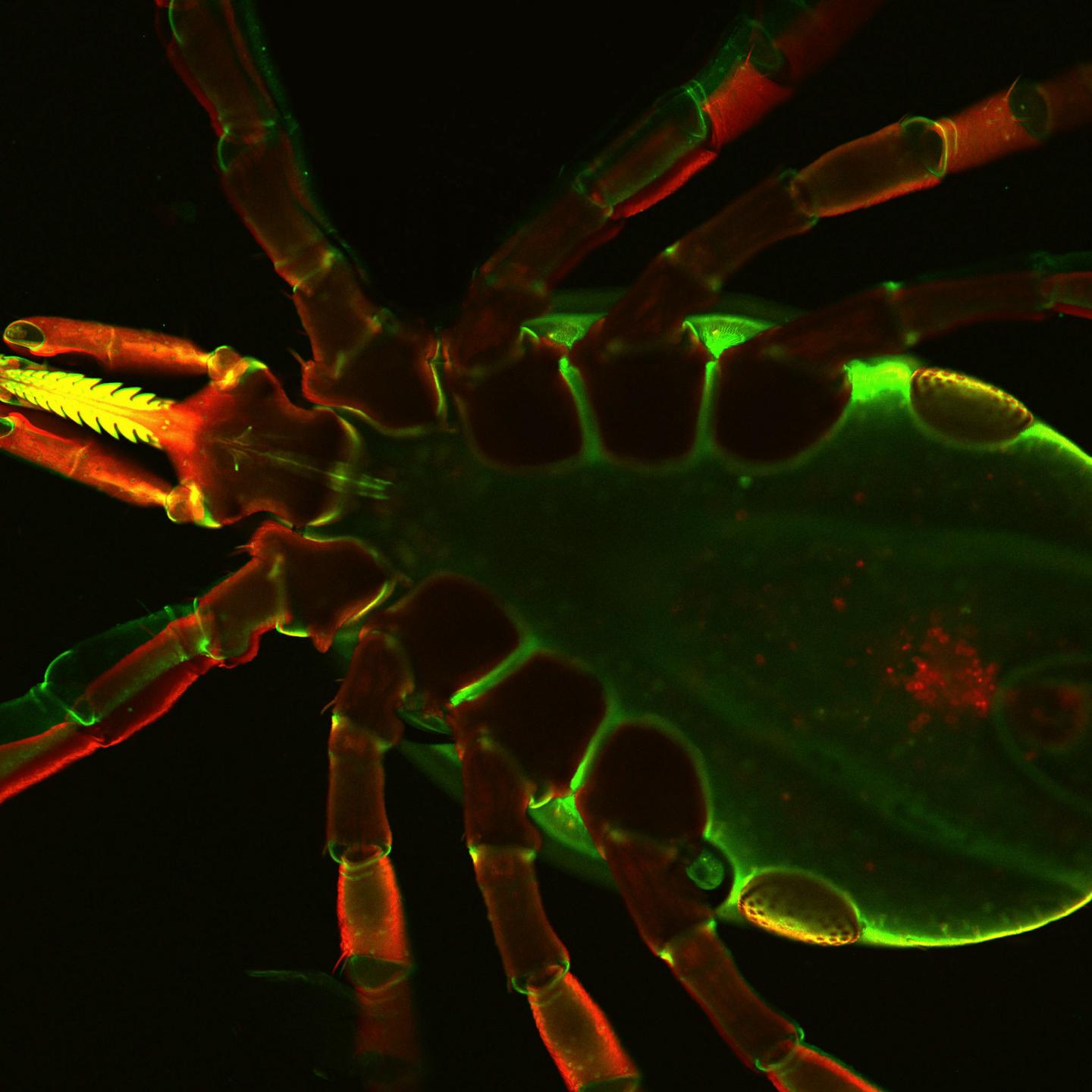 Ixodes scapularis ticks transmit the pathogens of Lyme disease, resulting in a multisystem illness in a variety of animals and humans. The image shows the bottom side of a live Ixodes tick as seen under a confocal immunofluorescence microscope. [Utpal Pal/University of Maryland]

A University of Maryland (UMD) scientist has discovered a mechanism by which the bacterium that causes Lyme disease persists in the body and fights early, innate immune responses. Utpal Pal, Ph.D., professor in veterinary medicine, isolated a protein produced by Borrelia burgdorferi that disables one of the body's first immune responses, giving insight into mechanisms that are largely not understood. He has also observed a phenomena demonstrating that even without this protein and with the immune system responding perfectly, the bacterium can spring back in the body weeks later.

Understanding this bacterium, which is among only a few pathogens that can actually persist in the body for long periods of time, has major implications for the treatment of tick-borne diseases like Lyme disease, which is an increasingly chronic and consistently a prevalent public health issue.

Dr. Pal and his colleagues published their study (“Plasticity in Early Immune Evasion Strategies of a Bacterial Pathogen”) in Proceedings of the National Academy of Sciences (PNAS).

“Borrelia burgdorferi is one of the few extracellular pathogens capable of establishing persistent infection in mammals. The mechanisms that sustain long-term survival of this bacterium are largely unknown. Here we report a unique innate immune evasion strategy of B. burgdorferi, orchestrated by a surface protein annotated as BBA57, through its modulation of multiple spirochete virulent determinants. BBA57 function is critical for early infection but largely redundant for later stages of spirochetal persistence, either in mammals or in ticks. The protein influences host IFN [interferon] responses as well as suppresses multiple host microbicidal activities involving serum complement, neutrophils, and antimicrobial peptides,” write the investigators.

“We also discovered a remarkable plasticity in BBA57-mediated spirochete immune evasion strategy because its loss, although resulting in near clearance of pathogens at the inoculum site, triggers nonheritable adaptive changes that exclude detectable nucleotide alterations in the genome but incorporate transcriptional reprograming events. Understanding the malleability in spirochetal immune evasion mechanisms that ensures their host persistence is critical for the development of novel therapeutic and preventive approaches to combat long-term infections like Lyme borreliosis.”

“Most people don't realize that they actually are walking around with more bacterial cells in their bodies than their own cells, so we are really bags of bacteria,” explains Dr. Pal. “Most are good, but the second your body detects something that is a pathogen and can cause disease, your immune system starts to work.”

The body sends a first, nonspecific wave of attack to kill the detected bacterium that doesn't belong. This happens within a few hours to days. If this doesn't work, it takes seven to ten days to learn about the enemy and send a large second wave of reinforcements to kill what is left.

“Lyme disease is actually caused by your immune system,” notes Dr. Pal. “This bacterium wins the first battle, and your body overreacts so much that it causes intense inflammation in all the joints and areas that the bacteria spreads by sending so many reinforcements to kill it. Borrelia is then killed, but the inflammation remains and causes many of your symptoms for Lyme disease. That is why killing Borrelia in the first wave of immunity is so important.”

The Centers for Disease Control and Prevention (CDC) estimate about 300,000 cases of Lyme disease annually in the United States. However, these cases are largely underestimated and reported due to the attention given to mosquito-transmitted diseases like malaria.

“The majority of all vector-borne diseases in the U.S. are actually tick-borne, and six of the 15 distinct tick diseases are transmitted by the Ixodes tick we study in our lab,” points out Dr. Pal. “The symptoms of these diseases present similarly to many other illnesses and are hard to pin down, so they are vastly underreported and an even bigger public health concern locally and globally than people realize.”

Now, chronic Lyme disease is a growing concern. Six to 12 months after traditional antibiotic therapy, many people have nonobjective symptoms, known as post-treatment Lyme disease syndrome, that return with varying intensity and no current treatment strategy.

Dr. Pal's research has shed some light on this issue and paved the way for future research and treatment options by discovering that even without the protein used to beat the first wave of immune defense, infection can reoccur in the body weeks later. “This means there is a second line of defense for Borrelia just like for our body's immune system. This had never been observed before and gives us insight into what could be causing these chronic Lyme disease cases,” according to Dr. Pal.

Sexual Behavior Determined by Immune Cells in the Brain