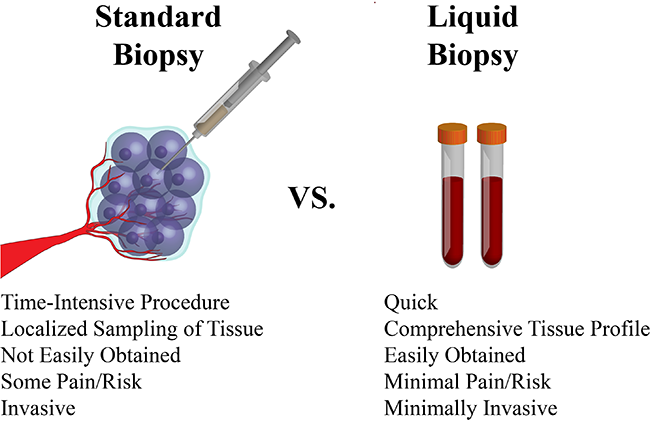 Researchers have designed a blood-based screening test to determine a patient’s risk of colon cancer recurrence and monitor the effects of chemotherapy after surgery. [mycancergenome.org]

One of the most exciting applications of precision medicine is the minimally to noninvasive technique of isolating tumor DNA from biofluids for diagnostic purposes—the aptly named liquid biopsy. This screening tool incorporates the power and speed of next-generation sequencing (NGS) to either diagnose disease or track the progression of a disease throughout a patient’s life or treatment course.

Now, investigators at Johns Hopkins Kimmel Cancer Center and the University of Melbourne have utilized liquid biopsy screening to predict the likelihood of recurrence in some—but not all—of a small group of patients with early-stage colon cancer. If confirmed by further research, this new test could eventually help clinicians decide which patients need additional treatment at the time of their initial cancer diagnosis of stage II cancer. Stage II tumors, in general, have invaded nearby tissues but have not spread to other organs, and uncertainty has long surrounded the question of whether chemotherapy prescribed after surgical treatment is beneficial.

“Prior studies, including ones from our group, have shown that this technique is sensitive enough to detect tumor DNA fragments in patients with advanced cancer,” explained co-senior study author Bert Vogelstein, M.D., co-director of the Ludwig Center at Johns Hopkins. “But this new study gets us one major step closer to the real goal because it suggests that it can detect residual disease in early-stage patients well before conventional clinical or radiologic criteria can.”

“Most patients with stage 2 colon cancers will be cured of the disease after surgery alone,” Dr. Vogelstein added. “However, some of these cancers will recur, and we need to improve our diagnostic approaches to detect recurrence earlier than it can be found with current, conventional methods.”

In the current study, the researchers followed 230 stage 2 colon cancer patients in 13 Australian hospitals for 4 years, beginning in 2011, collecting more than 1000 blood samples from them. After scanning the genetic sequences of tissue taken from the patients' tumors during surgery, the scientists identified at least one colon cancer-related gene mutation in the patients' original tumor.

The research team tracked each patient's cancer-related mutation in their blood samples using NGS. Samples were taken between 4 and 10 weeks after surgery and every 3 months afterward for up to 2 years. Patients also underwent a computed tomography (CT) scan of their entire body every 6 months after surgery for 2 years.

“The routine procedure is to give 6 months of chemotherapy, but we don't have any way of knowing if the treatment is effective,” noted lead study author Jeanne Tie, M.D., a Ludwig investigator at the Walter and Eliza Hall Institute of Medical Research (WEHI) in Victoria, Australia. “We have to be able to pick out a single tumor DNA among 10,000 normal DNA fragments. That's the level of sensitivity that we needed to get down to, and that wasn't possible until now.”

Among the 230 patients, 20 had cancer-linked DNA fragments in their blood, including 14 who did not to receive additional chemotherapy and six who did. Of the 14, 11 developed a recurrence, found on a CT scan, during the study. Of the six who received additional chemotherapy, three experienced a recurrence of their cancers during the study period. An additional 14 patients experienced cancer recurrences, but their blood tests showed no cancer-linked DNA.

“Although this and other DNA-based blood tests are not perfect, this study shows that when we find tumor DNA circulating in the blood of cancer patients, recurrence is very likely,” stated co-author Nickolas Papadopoulos, Ph.D., professor of oncology at the Johns Hopkins University School of Medicine and member of its Kimmel Cancer Center.

“When such a generic test is developed, it could still catch more than 90% of colorectal cancers, and it would eliminate the need to retrieve and test individual tumor samples, thus saving time, effort, and money,” added Peter Gibbs, M.D., a Ludwig investigator at WEHI who co-led the study.

The researchers surmised that better methods to predict the risk of recurrence, such as the liquid biopsy described in the current study, could identify a very-high-risk subset of patients who can form the basis of rigorous study of the benefit of additional treatment. The new findings affirm how research on cancer diagnostics goes hand in hand with research on new therapies.

“There is mounting evidence that ctDNA [circulating tumor DNA] is a viable approach for earlier detection of cancer recurrence, and more research is underway to refine the technology, improve its sensitivity and determine the best testing intervals,” concluded co-author Kenneth Kinzler, Ph.D., co-director of the Ludwig Center at the Johns Hopkins Kimmel Cancer Center.