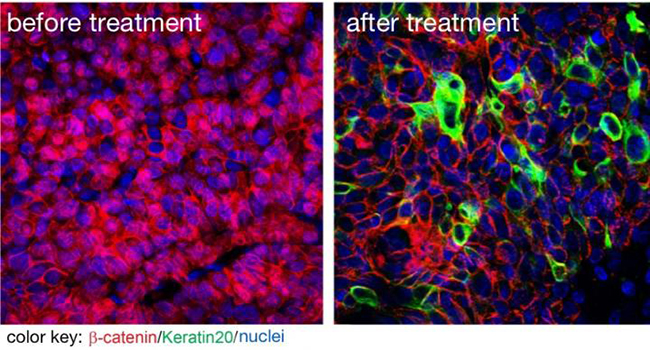 A major obstacle thwarting cancer treatment is being able to identify and eliminate all of the cancer cells, in particular, the few that retain the capacity to create an entire tumor. These so-called cancer stem cells not only have the ability to regenerate the tumor after therapeutic intervention, but they can also migrate to various other tissues, becoming lethal metastases.

A team of researchers from the Max Delbrück Center for Molecular Medicine (MDC) in Berlin have discovered a molecule that interrupts biochemical signals essential for the survival of a particular type of cancer stem cell—a finding they hope will open avenues toward better cancer drug candidates.

The investigators focused their attention on the biochemical signaling pathway called Wnt. They found that certain types of cancer stem cells required continual stimulation via this pathway to survive and maintain the properties that make them so dangerous. A molecule within this network, called beta-catenin, plays an essential role in transmitting Wnt signals to genes that promote the survival and reproduction of cancer cells. In healthy cells there is no signal from Wnt and beta-catenin is destroyed.

“In the absence of a signal, beta-catenin is locked out of the cell nucleus,” explained senior study author Walter Birchmeier, Ph.D., professor and group leader at the MDC. “It is linked to a complex of proteins that ultimately break it down. Normally it requires a signal to be released from this destruction complex, and it travels to the cell nucleus.”

Once inside the nucleus, beta-catenin binds to transcription factors, such as the protein TCF4, and in combination the two molecules activate specific target genes. With cancer there is no signal, but defective cellular molecules behave as if they have received one and release beta-catenin from the complex.

The MDC researchers surmised that it could be feasible to interrupt the interactions between beta-catenin and TCF4 with a drug, thereby preventing the aberrant signaling mechanism. However, contacts between two proteins are normally difficult to destabilize with the small molecules inhibitors. Because proteins usually bind over vast areas of their surfaces, a comparatively small obstacle won't prevent the interaction—a scenario that has been observed with other beta-catenin binding partners.

Nonetheless, the crucial points of contact between beta-catenin and TCF4 appeared to be small “hotspots,” which suggested to the researchers that a small molecule inhibitor might be able to block it. Using high-throughput drug screening assays, the investigators stumbled upon a compound they called LF3, which strongly inhibited binding of beta-catenin and TCF4.

The findings from the study were published recently in Cancer Research through an article entitled “A small-molecule antagonist of the β-catenin/TCF4 interaction blocks the self-renewal of cancer stem cells and suppresses tumorigenesis.”

After some extremely positive in vitro results with the new compound, the research team had lines of mice developed containing tumors derived from human colon cancer tissue. Once the animals began to develop tumors, the were injected with LF3.

“We observed a strong reduction of tumor growth,” Dr. Birchmeier noted. “What remained seemed to be completely devoid of cancer stem cells—LF3 seemed to be powerfully triggering these cells to differentiate into benign tissue. At the same time, no signaling systems other than Wnt were disturbed. All of these factors make LF3 very promising to further develop as a lead compound, aiming for therapies that target tumors whose growth and survival depend on Wnt signaling.”

The authors concluded that, “Collectively, our results strongly suggest that LF3 is a specific inhibitor of canonical Wnt signaling with anticancer activity that warrants further development for preclinical and clinical studies as a novel cancer therapy.”