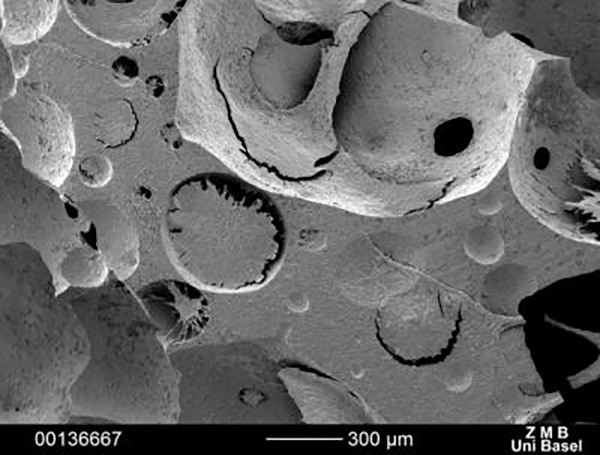 Scientists in Basel, Switzerland, have created an artificial tissue that mimics some of the biological properties of natural bone marrow niches and can support stem and progenitor cell replication over several days. The researchers, headed by Ivan Martin, Ph.D., at the University of Basel’s department of medicine and University Hospital Basel, and Timm Schroeder, Ph.D., at the department of biosystems science and engineering, Eidgenössische Technische Hochschule Zürich (ETZ), hope that the new tissue could be used to model blood cell formation and the development of blood diseases, and help to predict how patients will respond to different types of drug therapy.

“We could use bone and bone marrow cells from patients to create an in vitro model of blood diseases such as leukemia, for example,” suggest Drs. Martin and Schroeder. “Importantly, we could do this in an environment that consists exclusively of human cells and which incorporates conditions tailored to the specific individual.”

The team reports on its developments in the Proceedings of the National Academy of Sciences (PNAS), in a paper entitled “In Vitro Biomimetic Engineering of a Human Hematopoietic Niche with Functional Properties.”

In human adults, hematopoietic stem and progenitor cells (HSPCs) reside in the bone marrow (BM), but our understanding of how different types of blood cells are formed and the biology of bone marrow niches remain “limited,” partly because there are no suitable in vitro culture models, the authors say. In conventional in vitro models, the blood stem cells lose their ability to multiply and to differentiate into the different cell types. This makes it hard to study how blood cells are produced, knowledge that would help in the development of new treatments for blood disorders such as leukemia. “The establishment of an in vitro BM system would offer an experimentally accessible and tunable platform to study human hematopoiesis,” the researchers note.

The team's new artificial bone marrow tissue comprises both synthetic and human cell components, supported in a perfusion bioreactor. A porous, bone-like 3D scaffold made from a ceramic material is functionalized by human stromal and osteoblastic cells and by the extracellular matrix they deposited during perfusion culture in perfusion bioreactors. The overall molecular structure created is similar to natural bone marrow niches. “Here, we develop a 3D engineered human BM analog by recapitulating some of the hematopoietic niche elements,” the team states.

This 3D matrix and cellular architecture partially recapitulates the structural, compositional, and organizational features of the native human osteoblastic niche environment, and in initial tests supported the functionality of hematopoietic stem and progenitor cells over several days. “The resulting tissue exhibited compositional and structural features of human BM while supporting the maintenance of HSPCs,” the researchers write. “This was associated with a compartmentalization of phenotypes in the bioreactor system, where committed blood cells are released into the liquid phase and HSPCs preferentially reside within the engineered BM tissue, establishing physical interactions with the stromal compartment.” The researchers were able to carry out molecular customization of the 3D niches and simulated injury to demonstrate changes in HSPC behavior.

They hope that their artificial bone marrow tissue will have widespread applications in areas that include the study of factors that influence blood formation in humans and drug screening. The new tissue could also be used to generate customized bone marrow niches that display desired properties and into or from which specific proteins can be incorporated or removed.