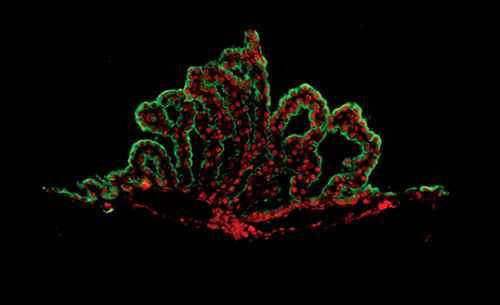 In fact, at an interface between the brain and the circulation called the choroid plexus, brain-derived signals appear to induce patterns of gene expression. These patterns, say researchers, reveal the brain’s immunological age. And the immunological age, as much as the chronological age, may determine cognitive decline.

This finding appeared August 21 in Science, in an article entitled, “Aging-induced type I interferon response at the choroid plexus negatively affects brain function.”

In other words, the researchers identified an immunological signature, a “signature of aging,” that exists solely in the choroid plexus—not in the other organs. This signature reflects the contours of interferon beta expression. Although interferon beta is normally produced by the body to fight viral infection, it appears capable of harming the brain.

“We systematically characterized the mRNA expression profile of young (three-month old) and aged (22-month old) murine organs by RNA-sequencing,” the authors of the Science article explained. “To exclude a non-aging-related effect, such as viral infection, we confirmed the increased expression of IFN-I-dependent genes by real-time quantitative PCR (qPCR) in different cohorts of aged mice from various animal centers. Closer examination by qPCR and immunohistochemical staining showed that whereas IFN-I-associated gene expression was increased in the aged choroid plexus, expression of type II IFN-dependent genes was decreased.”

The researchers also carried out immunohistochemical staining of brain sections of mice, as well as postmortem brain sections from non-CNS-diseased humans. The results, according to the authors, confirmed an aging-associated increase of IFN-I at the choroid plexus and suggested that this signature is conserved among species.

“The choroid plexus acts as a ‘remote control’ for the immune system to affect brain activity. Biochemical ‘danger’ signals released from the brain are sensed through this interface; in turn, blood-borne immune cells assist by communicating with the choroid plexus,” explained Dr. Schwartz. “This crosstalk is important for preserving cognitive abilities and promoting the generation of new brain cells.”

Dr. Schwartz and colleagues hope that their findings may help prevent or reverse cognitive decline in old age, by finding ways to rejuvenate the brain, or to at least slow the ticking of the brain’s immunological clock.