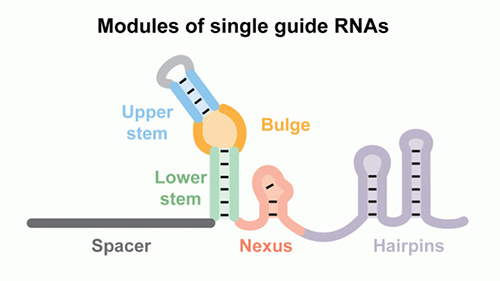 These modules, the researchers assert, are universally relevant for Type II-A CRISPR/Cas systems. Moreover, the researchers consider the possibility that guide RNAs could be altered to cross Cas9 orthogonality boundaries.

“We identify and characterize six conserved modules within native crRNA:tracrRNA duplexes and single-guide RNAs (sgRNAs) that direct Cas9 endonuclease activity,” the authors write. “We show the bulge and nexus are necessary for DNA cleavage and demonstrate that the nexus and hairpins are instrumental in defining orthogonality between systems. In contrast, the crRNA:tracrRNA complementary region can be modified or partially removed.”

The North Carolina State University researchers were led by Rodolphe Barrangou, Ph.D., an associate professor of food, bioprocessing, and nutrition sciences, and Chase Beisel, Ph.D., an assistant professor of chemical and biomolecular engineering.

“This paper sheds light on how CRISPR/Cas works,” Dr. Barrangou said. “If we liken this system to a puzzle, this paper shows what some of the system’s pieces are and how they interlock with one another. More importantly, we find which pieces are important structurally or functionally—and which ones are not.”

Such information, the authors of the Molecular Cell article suggest, may open new design and engineering avenues for CRISPR technologies, setting the stage for more precise genetic modifications.

If You Edit Genes Using CRISPR, Can You Undo the Effects?