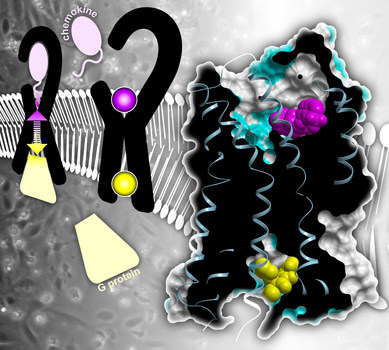 Right: Structure of CC chemokine receptor 2 (CCR2) bound to two inhibitors (pink and yellow). Left: Normally, chemokines outside the cell bind CCR2 and the receptor transmits that signal inside the cell via G proteins. Inhibitors block this signal transmission.

Scientists at the Skaggs School of Pharmacy and Pharmaceutical Sciences at the University of California San Diego have determined the 3D structure of CC chemokine receptor 2 (CCR2), a protein that sits on the surface of immune cells sensing and transmitting inflammatory signals that spur cell movement toward sites of inflammation, simultaneously bound to two inhibitors. Understanding how these molecules fit together may better enable pharmaceutical companies to develop anti-inflammatory drugs that bind and inhibit CCR2 in a similar manner.

CCR2 and associated signaling molecules are known to play roles in a number of inflammatory and neurodegenerative diseases, including multiple sclerosis, asthma, diabetic nephropathy, and cancer. Many drug companies have attempted to develop drugs that target CCR2, but none have yet made it to market.

“So far drugs that target CCR2 have consistently failed in clinical trials,” said Tracy Handel, Ph.D., professor in the Skaggs School of Pharmacy. “One of the biggest challenges is that, to work therapeutically, CCR2 needs to be turned 'off' and stay off completely, all of the time. We can't afford ups and downs in its activity. To be effective, any small-molecule drug that inhibits CCR2 would have to bind the receptor tightly and stay there. And that's difficult to do.”

CCR2 spans the membrane of immune cells. Part of the receptor sticks outside the cell and part sticks inside. Inflammatory molecules called chemokines bind the external part of CCR2, and the receptor carries that signal to the inside of the cell. Inside the cell, CCR2 changes shape and binds other communication molecules, such as G proteins, triggering a cascade of activity. As a result, the immune cells move, following chemokine trails that lead them to places in the body where help is needed.

In this study, the researchers used X-ray crystallography to determine the 3D structure of CCR2 with two molecules bound to it simultaneously, one at each end.

That's a huge accomplishment because, Dr. Kufareva said, “Receptors that cross the cell membrane are notoriously hard to crystallize. To promote crystallization, we needed to alter the amino acid sequence of CCR2 to make the receptor molecules assemble in an orderly fashion. Otherwise, when taken out of the cell membrane, they tend to clump together randomly.”

“It's our hope that this new structure of CCR2 with two bound inhibitors will help optimize current and future drug discovery efforts,” added Dr. Kufareva.