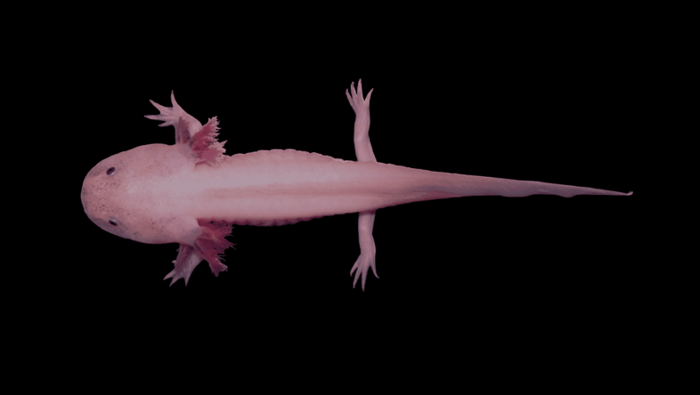 Axolotls (Ambystoma mexicanum) never outgrow their larval, juvenile stage, in a phenomenon called neoteny. In addition, the animals are known for their ability to regenerate damaged appendages and internal organs.

Mammals are almost incapable of regenerating the lost tissue incurred upon brain injury. Brain regeneration requires the coordination of complex responses in a time and region-specific manner. Being able to identify the cell types and molecules involved in brain regeneration would advance our understanding of the processes involved and provide potential targets for regenerative medicine.

To better understand this process, BGI and its research partners applied their spatial technology, known as stereo-seq, to reconstruct the axolotl brain architecture during developing and regenerating processes at single-cell resolution.

Examining the genes and cell types that allow axolotls to regenerate their brains may be the key to improving treatments for severe injuries and unlocking regeneration potential in humans.

This work was published in Science in the paper, “Single-cell Stereo-seq reveals induced progenitor cells involved in axolotl brain regeneration.” The paper was one of three studies published that, taken together, present single-cell transcriptomics analyses that give evolutionary context to salamander brains by comparing them with those of lizard, turtle, and mouse.

The team was able to identify 33 cell types present during development and 28 cell types involved in regeneration, including, they say, different types of excitatory and inhibitory neurons, and several ependymoglial cell subtypes.

Through the systematic study of cell types in various developmental stages, researchers found that during early development stage neural stem cells located in the ventricular zone region are difficult to distinguish between subtypes, and with specialized neural stem cell subtypes with spatial regional characteristics from adolescence, thus suggesting that various subtypes may have different functions during regeneration.

By comparing the molecular characteristics of the two processes, the researchers found that the neuron formation process is highly similar during regeneration and development, indicating that injury induces neural stem cells to transform themselves into a rejuvenated state of development to initiate the regeneration process.