Home Topics Cancer Which Genes are Most Commonly Mutated in Cancer? Salk Scientists Find Out 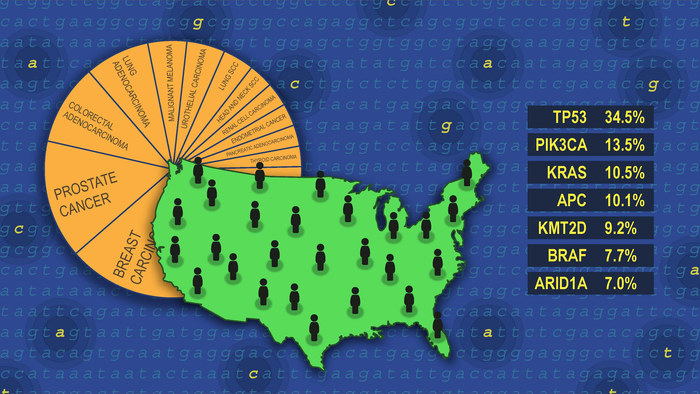 Salk study combines data on cancer DNA mutations with rates of cancer development to discover the most commonly mutated genes in all cancers. [Salk Institute]

Which genes are most commonly mutated in cancer? It’s a fundamental question that, perhaps surprisingly, has not been answered despite the past fifteen years of work done in cancer genomics. Now, a team of computational scientists at the Salk Institute for Biological Studies has combined gene mutation information with cancer prevalence data to reveal the genetic basis of cancer in the entire population of cancer patients in the United States. The work reveals how commonly each gene in the genome is mutated within the cancer patient population and the findings could help guide genetic research to develop more effective treatments than presently available.

The study, titled, “Cancer gene mutation frequencies for the U.S. population,” is published in Nature Communications.

“The paper answers a very basic question: what are the most commonly mutated genes in human cancer?” said Edward Stites, PhD, assistant professor of the Integrative Biology Laboratory at the Salk. “Surprisingly, this question had not been answered.”

Genetic mutations play a fundamental role in the development and growth of cancers and can also be targeted for effective treatment. While many studies have identified the mutations involved in certain cancers, no one had ever combined the data in a way that could reveal which mutations are most common in the entire cancer patient population.

In the new study, Stites’ team combined data sets from genomic and epidemiological cancer studies to determine what percentage of all cancer patients will have any gene mutated. Although this task initially seemed straightforward, they soon discovered that genomic and epidemiological studies do not use a common naming system for the various cancers. For example, some researchers classified cancers by location on the body while others grouped them by tumor type, and many used a combination of the two. This made it difficult to align the data, which was critical for determining how common the different mutations were.

To overcome the challenge, the scientists carefully analyzed more than 200 studies and individually reviewed and reclassified each cancer according to a consistent naming system. They then compared the data sets, taking into account the fact that some cancers are more common than others.

Overall, the team found that, “cancer genetics is less dominated by high-frequency, high-profile cancer driver genes than studies limited to a subset of cancer types have suggested.”

The team estimated that KRAS is mutated in only 11% of all cancers, which is less than PIK3CA (13%) and marginally higher than BRAF (8%). TP53 is the most commonly mutated gene (35%), and KMT2C, KMT2D, and ARID1A are among the ten most commonly mutated driver genes, highlighting the role of epigenetic dysregulation in cancer. In addition, the authors noted that, “analysis of major cancer subclassifications highlighted varying dependencies upon individual cancer drivers.”

When they analyzed the data, they found that some widespread beliefs were incorrect. For example, KRAS is an important cancer-promoting gene that was believed to be mutated in 25% of all cancers; rather, it was found to be involved in only about 11% of all cancers. This was part of a trend where individual genetic mutations were found to be less common than previously thought.

“These findings speak to a need to reevaluate where people have been focusing their time, attention, and resources,” said Stites. “We should be balancing research efforts more evenly across the different genetic causes of cancer, and we should be balancing the development of new cancer treatments more evenly across the different major treatment strategies, because the concept of targeting specific mutations will be less impactful than has been assumed.