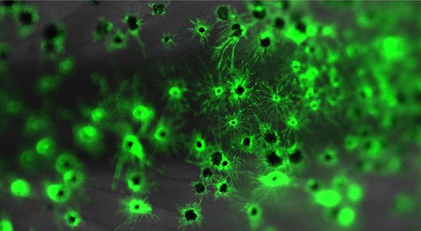 Understanding the genetic mutations that cause cancer is just one piece of the puzzle, new research says. Another piece to focus on is the plasticity of the process and its dependence on cellular context. The same set of mutations can cause cancer in one context, but not in another. Now, using zebrafish and human pluripotent stem cell cancer models, research shows that not all cells with genetic mutations become cancerous. In addition, cellular context and the intrinsic transcriptional program collaborate with genetic mutations to enable cells to form cancer—a process known as “oncogenic competence.” Lastly, controlling which genes are turned on in a cell offers potential opportunities to treat cancer.

This work is published in Science in the paper, “Developmental chromatin programs determine oncogenic competence in melanoma.”

A team from Memorial Sloan Kettering Cancer Center (MSKCC) in New York City report that melanoma formation depends on oncogenic competence. Cells that are competent to form melanoma can access a set of genes that are normally closed off to mature melanocytes. To access these locked-up genes, the cells require specific proteins that act as keys. Without them, the cells do not form melanoma, even when they have cancer-associated DNA mutations.

“The standard idea that has been around for decades is that you basically need two types of DNA mutations to get cancer: an activated oncogene and a disabled tumor suppressor gene,” said Richard White, MD, PhD, associate professor at MSKCC. “Once you clear those two hurdles, cancer will form. Now we have this entirely other thing—oncogenic competence—which adds a third layer to the mix.”

The project started more than a decade ago and began with an observation that White made while he was a postdoc studying melanoma in zebrafish. “When we looked at these melanomas in zebrafish, we could see that there were a number of active genes that are more characteristic of embryonic cells rather than mature melanocytes,” White said. “We were curious why these genes were turned on. Are they important in the development of the melanoma, and if so how?”

To answer this question, White and his team genetically modified zebrafish to contain a mutated BRAF gene—which is found in about one-half of melanomas. The gene was turned on at three different stages of melanocyte development in different fish: at the neural crest stage (NC), the melanoblast stage (MB), and the melanocyte stage (MC). They found that only the fish with BRAF activated at the NC and MB stages were capable of forming tumors (what the researchers call oncogenic competence). Cells with BRAF activated at the MC stage instead formed moles.

Next, they introduced the mutated BRAF gene into hPSCs at the same three stages that were studied in the fish, and then implanted these cells in mice to see which were able to form tumors. Once again, only the first two stages—NC and MB—were consistently able to form tumors.

The researchers then used molecular profiling to compare what was different about the active genes in the three stages—for both the zebrafish tumors and the human stem cell-derived tumors. From this comparison, they were able to see that the chromatin modifying factor particular ATAD2 was active in NC and MB cells, but not in MC cells.

When the scientists removed ATAD2 in a melanoma-prone zebrafish model, the cells lost their ability to form tumors. When they added it to MC cells, the cells gained this capacity.

Taking advantage of the vast amount of clinical data available at MSK and through the Cancer Genome Atlas, they could show that ATAD2 is important in cancer: Patients with high amounts of ATAD2 have significantly worse survival, suggesting it plays an important role in determining the outcome of DNA mutations like BRAF.

“The DNA mutations are like a lit match: If you have the wrong wood or if the wood is wet, you might get a bit of flickering but no fire,” said Arianna Baggiolini, PhD, postdoctoral fellow in the Lorenz Studer lab at MSKCC. “But if you have the right wood, and maybe some kindling, the whole thing burns up.”

Beyond melanoma, the authors noted, the specific combination of factors is likely to be different in each type of tumor. Further investigation into the mechanisms regulating their expression opens up the possibility of therapeutically targeting competence factors.