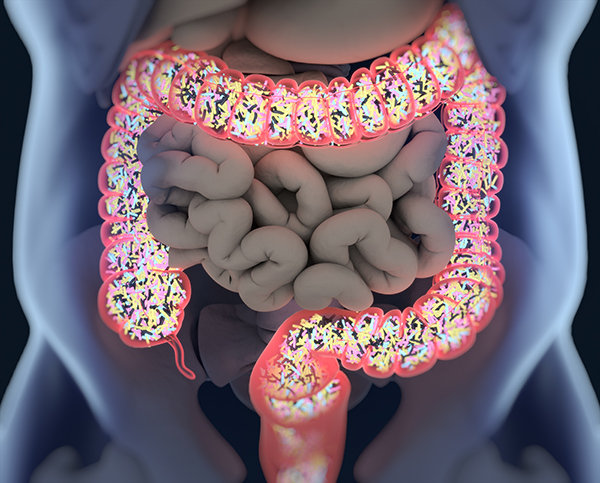 Scientists at Stanford University School of Medicine have linked ulcerative colitis (UC) with reduced levels of secondary bile acids (SBAs) and a relative lack of the gut bacteria that produce them. When the researchers compared two groups of patients—one group with surgically corrected ulcerative colitis, the other group with the rare noninflammatory condition familial adenomatous polyposis (FAP), who had undergone an identical surgical procedure, they found that the UC patients had a relative lack of Ruminococcaceae bacteria that produce enzymes for converting primary bile acids into secondary bile acids. In different mouse models of ulcerative colitis, SBA supplementation reduced intestinal inflammation.

The discoveries raise the prospect that supplementing ulcerative colitis patients with the missing metabolites—or perhaps restoring the natural gut bacteria that produce them— could effectively treat intestinal inflammation UC patients and perhaps patients with a related condition, Crohn’s disease. “This study helps us to better understand the disease,” said Aida Habtezion, MD, associate professor of gastroenterology and hepatology. “We hope it also leads to our being able to treat it with a naturally produced metabolite that’s already present in high amounts in a healthy gut.”

Habtezion and colleagues report on their findings in Cell Host & Microbe, in a paper titled, “Dysbiosis-Induced Secondary-Bile-Acid Deficiency Promotes Intestinal Inflammation.” A clinical trial to determine SBAs are effective in treating UC is now underway at Stanford. Habtezion is co-principal investigator on the trial, together with the Cell Host & Microbe paper’s co-first author Sidhartha Sinha, MD, an assistant professor of gastroenterology and hepatology.

Ulcerative colitis is a chronic, relapsing disease in which the immune system attacks tissue in the rectum or colon. UC affects about 0.3% of the global population, the authors wrote. About 1 million people in the U.S. have the condition, and the incidence is on the rise in newly industrialized countries in Asia, Africa, and South America. UC patients can suffer from heavy bleeding, diarrhea, weight loss, and if the colon becomes sufficiently perforated, life-threatening sepsis.

Treatments for ulcerative colitis are limited, consisting most commonly of multiple courses of antibiotics that carry their own risks, such as the development of dysbiosis, secondary infections, and bacterial resistance, the team noted. And while immunosuppressant drugs can keep ulcerative colitis at bay, such drugs also put patients at increased risk for cancer and infection. Not all patients respond to immunosuppressive therapy, and even when a drug does initially work, its effectiveness can diminish with time.

About one in five ulcerative colitis patients progress to the point where they require total colectomy, the surgical removal of the colon and rectum, followed by the repositioning of the lower end of the small intestine to form a J-shaped ileal-anal pouch to mimic the function of the removed rectum. These “pouch patients” can lead quite normal lives, but as many as half will develop pouchitis, a return of the inflammation and symptoms they experienced in their initial condition.

The Stanford scientists’ studies aimed to find out why. “The remarkable difference in pouchitis propensity of UC versus FAP suggests constitutive differences of these two populations,” they wrote. “To evaluate the role of BAs [bile acids] in intestinal inflammation we performed metabolomic, microbiome, metagenomic, and transcriptomic profiling of stool from ileal pouches (surgically created reservoirs) in colectomy-treated patients with ulcerative colitis (UC) versus controls (familial adenomatous polyposis [FAP]).”

The Stanford team’s initial results also showed that there was a large difference in levels of SBAs in the intestines of seven FAP patients compared with the 17 patients with ulcerative colitis who had undergone the pouch surgery. When the investigators measured these metabolite levels by examining the participants’ stool samples, they found that the two most prominent secondary bile acids, deoxycholic acid (DCA) and lithocholic acid (LCA), were depleted in stool specimens taken from the ulcerative colitis pouch patients, compared with samples from FAP pouch patients. “Our finding that shows the essential absence of LCA and DCA in UC pouches suggests a potential differential ability to convert PBAs to SBAs in UC—versus FAP-pouch microenvironment,” they wrote. “Based on the lower levels of LCA and DCA in UC than in FAP pouch stool samples, we postulate that these SBAs may be important in maintaining immune homeostasis in the pouch.” The scientists also commented that while the dramatic difference they observed haven’t previously been reported in pouch patients, “our finding are in line with the higher levels of SBAs in feces that has been observed in healthy subjects compared with patients with IBD.”

Their continued investigations showed that microbial diversity was diminished in ulcerative colitis pouch patients, and that a single bacterial family — Ruminococcaceae — was markedly underrepresented in ulcerative colitis pouch patients compared with FAP pouch patients. “Interestingly, of all the taxa identified, we observed only a significant reduction in the Ruminococcaceae family, indicating that this particular microbial family might play a role in maintaining intestinal immune homeostasis,” they wrote. Significantly, a genomic analysis of all the gut bacteria in the participants showed that the genes for making enzymes that convert primary bile acids to secondary bile acids were also underrepresented. Importantly, Ruminococcaceae are among the few types of gut bacteria that carry genes for those enzymes that can convert primary bile acids to secondary bile acids. “All healthy people have Ruminococcaceae in their intestines,” Habtezion said. “But in the UC pouch patients, members of this family were significantly depleted.”

In a further set of tests, the team showed that incubating primary bile acids with stool samples from FAP pouch patients, but not from ulcerative colitis pouch patients, resulted in the effective conversion of PBAs to SBAs. “We again found significantly reduced LCA and DCA production from microbes in the stool from UC compared with FAP pouches, confirming our initial direct findings from human samples.”

The next stage was to test whether restoring SBAs could reduce intestinal inflammation in vivo. Results of tests in three mouse models of colitis showed that supplementation with LCA and DCA reduced infiltration by inflammatory immune cells and levels of several inflammatory signaling proteins and chemicals in the animals’ intestines. The supplements also mitigated the classic symptoms of colitis in the mice, such as weight loss or signs of colon pathology. “Taken together, these data suggest a direct effect of SBAs on inflammatory gene expression,” the authors stated. “We are not aware of previous studies showing LCA or DCA to alleviate murine colitis at concentrations that are physiologically relevant.” And given that all three mouse models are considered representative of inflammatory bowel disease in general, including Crohn’s disease, the findings may apply to Crohn’s disease patients as well as UC patients, Habtezion said.

Interestingly, the protective effects of SBAs in the mouse models was at least in part dependent on the presence of the TGR5 bile acid receptor. SBA supplementation wasn’t effective in ameliorating UC in knockout mice that lacked the TGR5 receptor (TGR5-/- animals). “The protective effect of LCA was lost in TGR5-/- mice, which was reflected by worsened colitis disease parameters as shown by weight loss, disease activity, colon length, and gross colon morphology compared with WT mice treated with LCA.”

The researchers have initiated a Phase II trial at Stanford, to investigate the anti-inflammatory effects, in 18- to 70-year-old patients with antibiotic-refractory ulcerative colitis pouchitis, of oral supplementation with ursodeoxycholic acid, a naturally occurring SBA that is approved by FDA for treating primary biliary sclerosis and for management of gallstones. “Insights from this study will further inform our understanding of the role of SBAs in intestinal inflammation and hold promise to provide an effective treatment,” they stated.