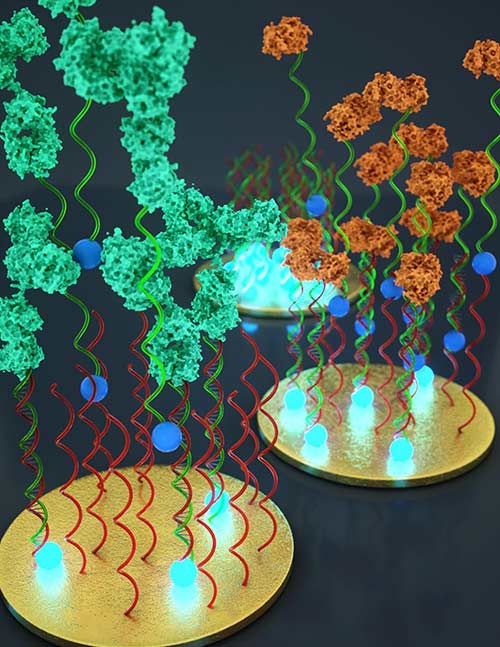 Scientists have built an inexpensive, portable sensor that enables fast and easy detection of multiple diagnostically relevant proteins. The diagnostically relevant protein (green or red), if present, binds to an electro-active DNA strand and limits the ability of this DNA to hybridize to its complementary strand located on the surface of a gold electrode. This causes a reduction of electrochemical signal, which can be easily measured with simple electronics. [Ryan & Peter Allen]

Does being able to test for allergies, STDs, or even cancer in minutes from the comfort and privacy of your home sound like science fiction? Well, a newly designed test from researchers at the University of Montreal could make it a reality before the next Star Trek movie comes to theaters.

The Canadian scientists have designed a rapid, inexpensive diagnostic test that should only take minutes to perform. This new design could aid efforts in building point-of-care devices for quick medical evaluations.

The tests are comprised of DNA molecules and the key to the new design is that it takes advantage of a basic force that drives molecular chemistry—steric effects, repulsion forces that arise when atoms are brought too close together. This design allows the assay to detect a wide range of protein markers associated with various disease states.

“Despite the power of current diagnostic tests, a significant limitation is that they still require complex laboratory procedures. Patients typically must wait for days or even weeks to receive the results of their blood tests,” explained senior author Alexis Vallée-Bélisle, Ph.D., professor in the department of chemistry at the University of Montreal. “The blood sample has to be transported to a centralized lab, its content analyzed by trained personnel, and the results sent back to the doctor's office. If we can move testing to the point of care, or even at home, it would eliminate the lag time between testing and treatment, which would enhance the effectiveness of medical interventions.”

The findings from this study were published recently in the Journal of the American Chemical Society through an article entitled “A highly selective electrochemical DNA-based sensor that employs steric hindrance effects to detect proteins directly in whole blood.”

Interestingly, a key breakthrough for the realization of the test design came about serendipitously. “While working on the first generation of these DNA-based tests, we realized that proteins, despite their small size (typically 1000 times smaller than a human hair) are big enough to run into each other and create a steric effect (or traffic) at the surface of a sensor, which drastically reduced the signal of our tests,” said lead author Sahar Mashid, Ph.D.,  postdoctoral scholar at the University of Montreal “Instead of having to fight this basic repulsion effect, we instead decided to embrace this force and build a novel signaling mechanism, which detects steric effects when a protein marker binds to the DNA test.”

The chemistry behind the sensing mechanism is fairly straightforward: a diagnostically relevant protein, if present, binds to an electro-active DNA strand, and limits the ability of this DNA to hybridize to its complementary strand located on the surface of a gold electrode. The resulting current created by the signaling mechanism is sufficient enough to be picked up by simple electronic devices, such as those used by in-home glucose meters.

Using this DNA-base assay, the investigators were able to detect multiple protein markers directly in whole blood in fewer than 10 minutes, even if their concentration was a million times less concentrated than glucose.

“A great advantage of this DNA-based electrochemical test is that its sensing principle can be generalized to many different targets, allowing us to build inexpensive devices that could detect dozens of disease markers in less than five minutes in the doctor's office or even at home,” concluded Dr. Vallée-Bélisle.