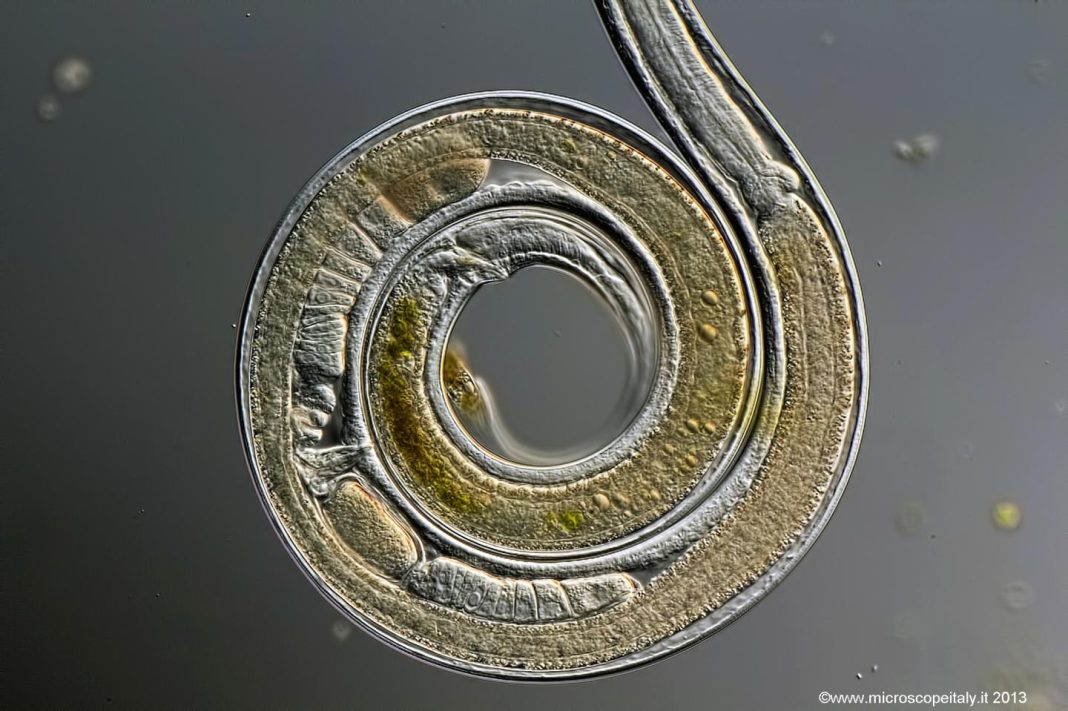 A biomarker of aging has emerged from a study of long-lived worms. The biomarker, a transcriptomic signature, consists of expression data from relatively few genes. Consequently, it helped narrow a search for potential life-extension drugs from a database of FDA-approved drugs. Ten candidate drugs were identified, four of which had never been evaluated for anti-aging properties. The top-ranking candidates achieved up to a 30% extension of mean lifespan in their experimental model, the nonparasitic roundworm, Caenorhabditis elegans.

These findings were reported by an international team of researchers led by Peter Fedichev, who is affiliated with the Moscow Institute of Physics and Technology and Gero, a longevity biotech startup. They express confidence that the rate of aging can be impacted without overhauling aging’s underlying molecular mechanisms. Also, they suggest that their findings may be relevant beyond their experimental model, and even point to pharmacological interventions that could alter aging trajectories in humans.

Details appeared May 14 in Scientific Reports, in an article titled, “A universal transcriptomic signature of age reveals the temporal scaling of Caenorhabditis elegans aging trajectories.” The article describes how the scientists compiled an RNA-sequencing dataset of age-dependent transcriptomes produced from C. elegans isogenic strains and populations that have vastly different lifespans.

The scientists used both mutant worms as well as normal, wild-type worms after suppression of selected target genes; they assessed the worms’ expression profiles at a range of adult ages; and they leveraged machine learning techniques to analyze these experimental results and to compare them with earlier data available from public resources.

The cost of the resulting dataset, named MetaWorm, is approaching $10 million and is a perfect example of scientific data recycling. Through analysis of the unique MetaWorm dataset, the scientists confirmed and extended the pattern of transcriptomic shifts that accompany nematode aging.

“Our main concern was that aging in an extremely long-living worm might be totally different from that of normal, wild-type nematodes,” said Fedichev. “In that case, the radical extension of lifespan would require complex interventions, and studies of animals with drastically slowed aging would not help us in our search for a truly effective anti-aging therapy.”

It turned out that on the molecular level, the process of aging in nematodes always unfolds in the same way, and all the observed differences in lifespan appear to reflect changes in the rate of aging. The researchers proposed that similar effects should be achievable without genetic interventions.

To test the hypothesis, the researchers employed the Connectivity Map (CMAP) created by scientists at the Broad Institute of MIT and Harvard. CMAP contains information about the effect of almost all available FDA-approved drugs on gene activity in human cells. The researchers looked for drugs that alter human gene expression in a way opposing the age-related changes observed for corresponding genes in nematodes.

From the 1,309 drugs in the CMAP database, the researchers chose 10 candidates that appear to act on genes in the desired direction. Six of these drugs had been previously documented anti-aging potential, while four of the shortlisted drugs had never been studied before in that context. The experiment demonstrated that all these drugs slow down aging in nematodes, albeit to different degrees. The most efficient compound extended the nematode lifespan by 30%.

“The observed temporal scaling of survival curves and aging trajectories, together with the robust pattern of gene-expression changes associated with aging, appeared to be universal across extremely diverse biological conditions tested in our experiments,” wrote the authors of the Science Reports article. “From this, we deduce that life-extending effects are achieved by stabilizing the gene regulatory network and by slowing the rate of aging, rather than by qualitatively changing the molecular machinery of the whole organism. This means that the course of aging of the super-long-lived strains can be potentially mimicked therapeutically, and hence eventually would lead to dramatically increased lifespan without detrimental effects.”

The authors also proposed a new method of searching for life-extending compounds. “The usual procedure involves laborious screening of large libraries of potential drugs,” noted Andrei Tarkhov, Gero research scientist and a PhD candidate at Skolkovo Institute of Science and Technology. “Unfortunately, even successful hits sometimes get missed by chance or due to non-optimal dosage. Our method allows for a targeted search of the compounds with the required activity, including FDA-approved drugs. The latter compounds have the advantage that they have already passed all the necessary clinical trials and can be used off-label as anti-aging drugs.”