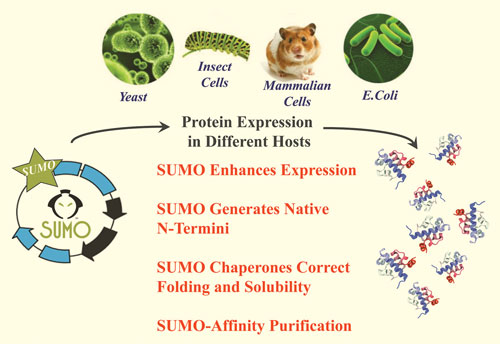 As commonly defined, difficult-to-express proteins (DTEPs) do not emerge in fully soluble, well-folded, and active form in a heterologous expression system. “Their major characteristic is the tendency to aggregate and form inclusion bodies,” says Fabrizio Gianotta, Ph.D., CEO at Progenosis.

The Progenosis approach to overcoming expression hurdles involves a bifunctional hybrid protein (BHP)—a recombinant molecule based on grafting the protein of interest to a proprietary scaffold with enzymatic activity.

“The BHP scaffold is a Bacillus enzyme conferring bacterial resistance to the lethal effect of antibiotic drugs,” explains Dr. Gianotta. “This activity is the pivotal driver of an efficient positive drug-based screening: in the presence of drug, only bacteria able to produce a well-folded and soluble BHP will be selected.”

According to Dr. Gianotta, BHP technology allows production of soluble proteins that have never previously been produced in a conventional expression system. For now, applications are limited to proteins used in research, drug discovery, and diagnostics. But since the technique works with any protein, with no limitations as to function or structure, he sees future applications in the production of therapeutic and diagnostic mono- and polyclonal antibodies.

In practice, bacterial proteins are easier to produce, whereas proteins from higher organisms are more difficult to express in active form. Multiple factors may be at play here. The recombinant host translation rate may be too rapid for co-translational folding of heterologous proteins, or protein folding and/or stability may require a partner protein, post-translational modifications, or appropriately paired disulfide bonds.

For example, proteins that travel the secretory pathway in the native cell generally require one or more disulfide bonds for stability and proper structure. Such proteins may be expressed in yeast or other eukaryotic systems, which exploit the catalytic activity of protein disulfide isomerase residing in the endoplasmic reticulum.

“In Escherichia coli, DsbA and DsbC are the primary factors (naturally found in the periplasm) that catalyze disulfide bond formation,” Dr. Samuelson says. “However, periplasmic expression does not generally allow for high yields since the target protein must be transported across the inner membrane.”

Instead, a preferred method of producing disulfide-rich proteins is to employ engineered E. coli strains, such as the Origami™ or SHuffle® strains. The common genetic alterations in Origami and SHuffle are deletions of genes encoding glutathione reductase and thioredoxin reductase, changes that create an environment that favors oxidation of paired cysteine residues.

“Ease and cost of scale-up must be considered when choosing an expression system,” advises Dr. Samuelson.

Secretion of the target protein outside the cell may require the processing of large volumes of culture supernatant, as in yeast systems. Another consideration during scale-up is that even mildly toxic proteins can lead to plasmid loss or decreased yield when basal expression is allowed during high-density growth. “For these reasons, the value of a strictly regulated host-vector system cannot be underestimated in larger scale fermentation processes,” asserts Dr. Samuelson. “Accordingly, many engineered E. coli strains are available that provide tightly regulated and tunable expression.”

Larger proteins do not express easily in bacteria, mostly due to poor solubility and slow folding to adopt native conformation. Small ubiquitin-like modifier (SUMO) proteins constitute a family of approximately 12 kDa proteins that covalently attach to and cleave from other proteins to modify target protein function.

SUMOylation is a post-translational modification involved in such cellular processes as transport, transcriptional regulation, apoptosis, protein stability, stress response, and cell-cycle function. SUMOpro™, a fusion technology from LifeSensors based on SUMO, enhances expression and solubility of proteins in E. coli while simultaneously facilitating rapid purification of active proteins, according to the company’s CEO, Tauseef Butt, Ph.D.

He points out that the company also offers SUMOstar™ for expressing and purifying recombinant proteins from eukaryotic cells. SUMOstar overcomes the problem of SUMOylation in higher-organisms cells, namely the presence of cleaving enzymes or SUMOylases, notes Dr. Butt, who adds that SUMOstar adducts resist these enzymes.

SUMO enhances expression of most proteins, whether difficult or easy to express, he continues: “It enhances expression levels of most proteins we have tried it with. SUMO itself a rapidly folding, stable protein, which we believe helps serve as an initiation site for the folding of the partner protein,” he continues. “SUMO contains a His tag, which provides facile purification.”

Dr. Butt believes his firm’s SUMO platforms are scalable to typical production volumes. He cites a problem that occurred several decades ago with the manufacture of human growth hormone. An unwanted methionine residue remained.

“They had to go back and use an aminopeptidase to remove the methionine,” recalls Dr. Butt. “If they had used a SUMO-based platform they could have saved themselves a lot of trouble.” Prabuddha Kundu, Ph.D., executive director at Premas Biotech, takes a much more pragmatic view of expression difficulty. To him, a DTEP is any protein that, for whatever reasons, is difficult to obtain at desired quantities.

“Everything related to obtaining a purified protein counts, whether it’s amino acid sequence, number of disulfide bonds, physical properties, or intended use,” says Dr. Kundu. “If you’re making a vaccine that requires 10 purification steps, that will not fly. But if a milligram of protein will solve your problem, you will do everything, including brute force, to get it.”

Premas Biotech nevertheless recognizes the significance of expression within its supply-based view. The company developed empirical, proprietary software that assesses protein “difficulty” according to 18 parameters known to affect expression. It then compares these values to those from a database of 500 proteins the company has worked with, which provides a structure-function correlate to expression.