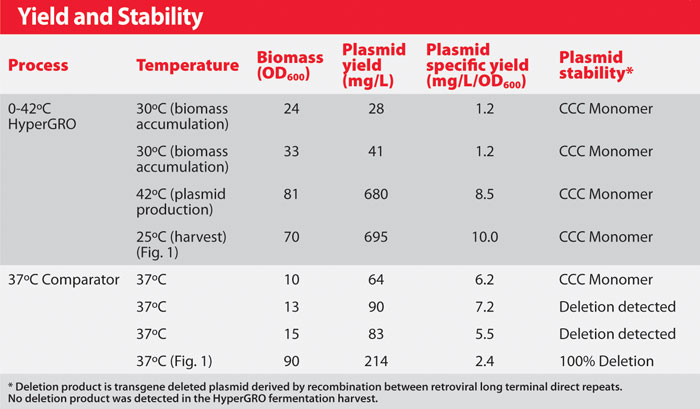 Processes yielding >500 mg plasmid DNA/L have previously been reported by Merck, Boehringer Ingelheim, and Nature Technology (NTC). Common features among these high-yield processes include the use of fed-batch fermentation with high copy number plasmids.

Due to the controlled addition of nutrients, much higher cell densities can be achieved with a fed-batch process (as opposed to a batch process), and specific growth rates can be reduced, which generally results in increased plasmid copy number.

Commonly used therapeutic and DNA vaccine vectors also contain a high copy pUC-type origin of replication that results in increased copy numbers at temperatures above 30°C. Selection of host strain also has a strong influence on the quality and quantity of plasmid produced.

Host strains are generally K-12 derived and should be recA- to avoid homologous recombination, and endA- to avoid plasmid nicking by the nonspecific endonuclease during purification.

Popular plasmid host strains that meet these requirements include DH5α, DH10B, and XL1-Blue. Stabilizing host strains are commercially available for production of unstable plasmids. However, in our experience such strains often result in lower plasmid yields.

This process uses proprietary semi-defined fed-batch media, in which the carbon:nitrogen ratio (C:N) and trace mineral composition have been optimized for both biomass growth and high-quality plasmid production. Seed culture growth and initial growth in the bioreactor are performed at 30°C.

After an initial batch phase that typically lasts about 15 hours, the fed-batch phase begins with controlled feeding of a concentrated nutrient medium according to a predetermined exponential feeding profile to achieve a specific growth rate of approximately 0.12 h-1. With this strategy, high cell densities are achieved without the requirement for feedback control of the nutrient feed rate.

During mid-fed-batch phase, the temperature is increased to 42°C and held for a period of hours to induce high copy number plasmid production (with temperature-sensitive origin plasmids). Throughout the process, pH is controlled at 7.0 ± 0.1 by automatic addition of ammonium hydroxide or phosphoric acid; dissolved oxygen (DO) is controlled at 30% of air saturation by aeration and agitation. Oxygen enrichment of the air is used as needed to support high cell density.

The low metabolic burden imposed throughout most of this process provides key benefits for plasmid DNA production. The combination of reduced temperature biomass accumulation and nutrient limited growth conditions the cells to support very high plasmid copy numbers after raising the temperature to 42°C.

Fermentation plasmid yields from 500 mg pDNA/L to over 1 g pDNA/L are routinely obtained with commonly used vectors such as pVAX1 and gWiz, while yields greater than 2g pDNA/L can be obtained with optimized vectors.

In addition to high yields, the HyperGRO process allows for stable production of unstable or toxic plasmids in E. coli DH5α, resulting in much higher yields than are typically achieved with specialized stabilizing host strains.

The HyperGRO process resulted in high yield production of a retroviral plasmid, which was lower yielding and unstable in a 37°C fermentation process, as shown in the Table and Figure 1.

The methods used during generation of cell bank glycerol stocks can have a dramatic effect on plasmid yield from a fermentation process, although the importance of this may be often overlooked. An important step used in combination with the HyperGRO process includes performing transformation incubation steps at 30°C (instead of 37°C) to minimize plasmid-mediated metabolic stress on the host cells as early as possible to maximize health and stability of the transformed cell line.

The impact of cell bank health on plasmid production in the HyperGRO process was recently demonstrated at NTC. A client-supplied master cell bank (MCB) of a high copy origin plasmid in host strain DH5α was used to inoculate a HyperGRO fermentation, which exhibited poor growth, and yielded less than 20 mg pDNA/L.

After re-transforming the plasmid into DH5α, with the outgrowth and plating steps performed at 30°C to create a new cell bank, final plasmid yield from a HyperGRO fermentation reached 800 mg pDNA/L.

The temperature shift from 30 to 42°C in the HyperGRO process is typically performed rapidly as a step change in set point when cell density is within a range of 50 to 60 OD600, taking approximately 25 minutes to increase from 30 to 42°C.

To investigate the effect of a slow temperature induction rate, a linear temperature ramp from 30 to 42°C, beginning in the fed-batch phase and proceeding for 16 hours (0.75°C/h), with a hold at 42°C prior to harvest was performed in a 10 L HyperGRO fermentation. This resulted in a high plasmid yield of 2.6 g pDNA/L at the 10 L scale (Figure 2).

The influenza DNA vaccine used in these experiments contains an optimized vector backbone, which is stable. However, for production of known unstable plasmids, biomass accumulation at 30°C with a more rapid temperature shift is recommended to maximize plasmid stability.

The HyperGRO process provides high quality plasmid enriched feed streams for more efficient production and purification of a variety of plasmid vaccines and therapeutics. NTC uses the HyperGRO process to manufacture research grade plasmid and has licensed this process to several GMP contract manufacturing organizations in the USA and Europe for clinical grade plasmid production. Scalability of the process to >100L has been successfully demonstrated through technology transfer to these GMP facilities. Use of HyperGRO for research and clinical grade plasmid production maintains continuity of process from preclinical safety studies to clinical trials. Aaron E. Carnes (acarnes@natx.com) is director of process development, and James A. Williams, Ph.D., serves as CSO at Nature Technology.