Across party lines, lawmakers have continued supporting increased funding for the NIH into this fiscal year—though the outcome for the fiscal year that starts October 1 remains anyone’s guess.

For the current fiscal year, the NIH won a nearly 5% or $2 billion increase over the previous fiscal year’s budget, to $44.96 billion. While that figure is 2.5% below the $46.1 billion sought by a consensus of advocates, the end result does mark a 45% increase in NIH spending over the past seven fiscal years.

That increase, arguably, is a testament to biomedical research funding remaining one of the few topics on which both parties have seen eye to eye in recent years. Indeed, the $1.5 trillion spending measure that included the NIH increase was passed by bipartisan majorities of 361-69 in the House and 68-31 in the Senate.

Whether NIH funding remains an area of consensus is uncertain. Congressional midterm elections this November could shift the majority of the U.S. Senate and/or the U.S. House of Representatives from Democratic to Republican—an outcome that would probably delay action on the budget proposed in March by President Joe Biden.

Biden has proposed a 9% increase for the NIH, which would bring the agency’s budget up to $49.04 billion. Some 10% of the total budget would go to the Advanced Research Projects Agency for Health (ARPA-H), a program championed by Biden. The ARPA-H, which was established this fiscal year with $1 billion (well below the $6.5 billion sought by the president), says that it will support “transformative high-risk, high-reward research to drive biomedical and
health breakthroughs.”

As Michael Lauer, MD, the NIH’s deputy director for extramural research, wrote on the agency’s website in March, the NIH issued 56,794 competing and noncompeting extramural research awards in FY 2021, totaling about $32.32 billion—up $1.56 billion from FY 2020 (a 5% increase)—with 625 more grants funded. The extramural dollars awarded by the NIH supported research conducted at 2,696 organizations—including universities, medical schools, and other research institutions in every U.S. state and worldwide.

About 75% of the agency’s FY 2021 budget supported extramural research. Another 10% supported projects conducted by approximately 1,200 principal investigators and more than 4,000 postdoctoral fellows in its own laboratories, most of them on the NIH campus in Bethesda, MD.

We have ranked 50 institutions—universities, medical schools, research organizations, and teaching hospitals—according to how much NIH funding they had received as of June 6 in FY 2022. (FY 2022 ends on September 30.) Also included for each NIH grant recipient is the number of grant awards funded in FY 2022. (This number was not a factor in the ranking.)

Another six states received NIH grants for two institutions each (Illinois, Maryland, Minnesota, Ohio, Pennsylvania, and Washington state). The other 15 states have a single NIH-funded institution among the top 50 institutions listed here. 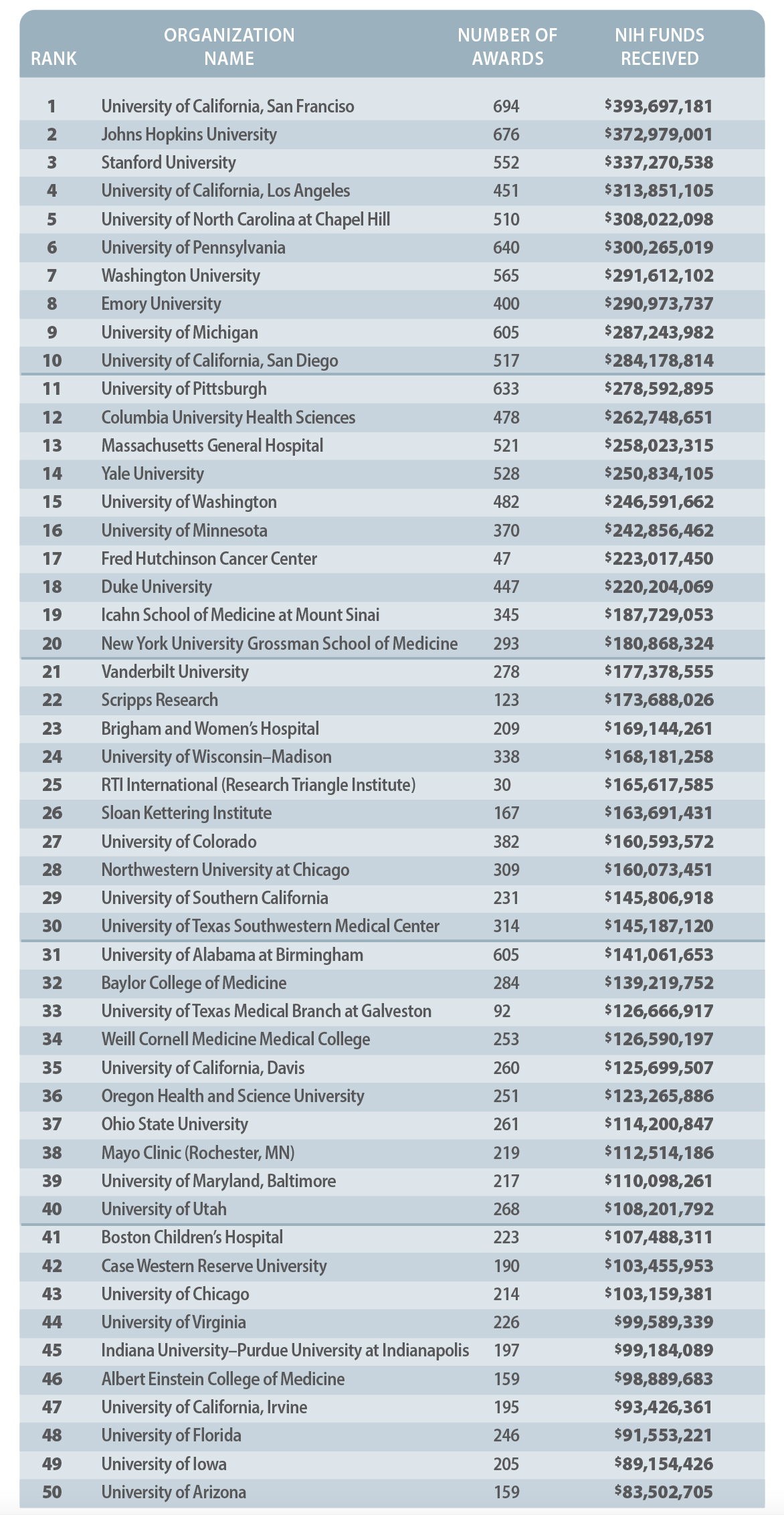