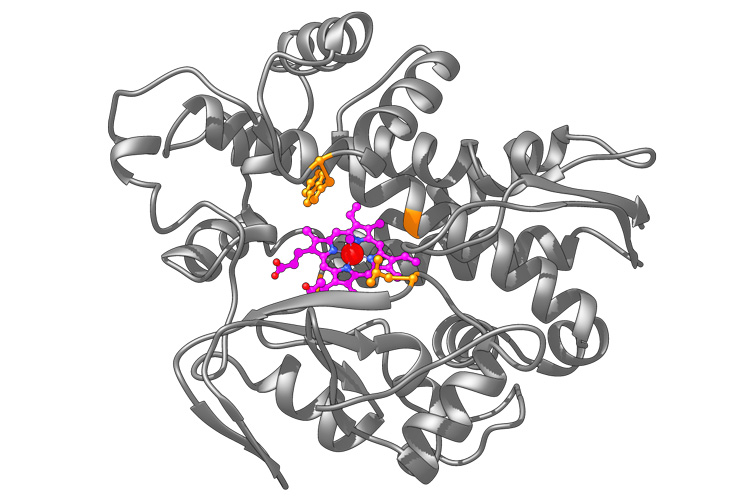 To bridge the gap between the natural and the unnatural worlds—which is to say, between the living cell and the chemistry laboratory—scientists based at the University of California (UC), Berkeley, and Lawrence Berkeley National Laboratory have engineered a bacterium that is capable of unnatural biosynthesis. This bacterium can express natural and artificial enzymes that work together in a heterologous biosynthetic pathway.

Details about the bacterium appeared in Nature Chemistry, in an article titled, “Unnatural biosynthesis by an engineered microorganism with heterologously expressed natural enzymes and an artificial metalloenzyme.” The article emphasizes that integrating artificial enzymes into metabolic networks could broaden the cache of molecules that can be produced biosynthetically.

“We engineered Escherichia coli with a heterologous terpene biosynthetic pathway and an artificial metalloenzyme (ArM) containing an iridium–porphyrin complex that was transported into the cell with a heterologous transport system,” the article’s authors wrote. “We improved the diastereoselectivity and product titer of the unnatural product by evolving the ArM and selecting the appropriate gene induction and cultivation conditions.”

The ArM in the current study is a modified version of P450, an enzyme that occurs naturally in many forms of life, though not, it happens, E. coli. P450 ordinarily contains a heme molecule, which in turn contains an iron atom. The ArM version of P450, however, swaps out the iron for iridium. This change equips ArM to execute a reaction not found in the natural world.

ArM was first created in the test tube by scientists led by John Hartwig, PhD, UC Berkeley professor of chemistry and one of four senior authors of the study. The scientists demonstrated that ArM could add cyclopropanes to other organic molecules by sticking a third carbon onto a carbon-carbon double bond. Moreover, ArM could do so with stereospecificity—that is, it could generate just one of the cyclopropanated molecule’s two mirror-imaged forms.

Then Hartwig’s team collaborated with the laboratories of Aindrila Mukhopadhyay, PhD, a Berkeley Lab senior scientist (and vice president of the Biofuels and Bioproducts Division at the Joint BioEnergy Institute), and Jay Keasling, PhD, a UC Berkeley professor of chemical and biomolecular engineering (and a senior faculty scientist at Berkeley Lab and CEO of the Joint BioEnergy Institute). The scientists worked together to see if they could incorporate the iridium-containing heme into P450 enzymes inside living E. coli cells and give the bacteria the ability to make cyclopropanated molecules completely within the cell.

Working with UC Berkeley graduate student Brandon Bloomer, they found a way to transport the heme molecule containing the iridium into E. coli, where a majority of the iridium added to the medium in which the bacteria grow became incorporated into a P450 enzyme. The synthetic biologists then balanced the metabolism of the bacteria so that they could produce the final product—a cyclopropanated limonene—in a living bacterial culture.

“It’s a completely new way of doing chemical synthesis,” Hartwig said. “The idea of creating an organism that makes such an unnatural product, that combines laboratory synthesis with synthetic biology within a living organism—it is just a futuristic way to make organic molecules from two separate fields of science in a way nobody’s done before.”

Mukhopadhyay added that the achievement could greatly expand the applications of synthetic biology, which is a greener, more sustainable way to make chemicals for consumers and industry. “Today, many drugs are laboriously extracted from plants that are challenging to cultivate and negatively impact the environment,” she explained. “To be able to reliably make these compounds in a laboratory using biotechnology would really address a lot of these problems.”

This applies to making “not just medicines, but precursors to polymers, renewable plastics, biofuels, building materials, the whole gamut of things that we use today, from detergents to lubricants to paints to pigments to fabric,” she continued. “Everything can be made biologically. But the challenge lies in developing sustainable renewable pathways to it. And so here, we’ve taken a pretty substantial step toward it, where we have been able to demonstrate an artificial chemistry within a cell, a living growing cultured cell, which is inherently then scalable.”

Enzyme’s Function Found via Computational Analysis of Its Potential Targets